In the range of human emotions, jealousy strikes primal. Cain, son of Adam in the Bible, slew his brother out of jealous voluntary.

These are all efforts to end the voluntary nature of the relationship and maintain bonding through intimidation. The marriage with such a history will be uncomfortable—on both sides—since it is involuntary and inescapable. People don’t take well to being held captive, whatever the bonds that tie them, says Frank Pittman in his book Private Lies (W.W. Norton, 1990).

Jealousy is sometimes the surest way to get rid of the very person you are afraid of losing. Conversation between the r own desire to cheat on their spouse and accuse their partner of cheating instead. Feeling sexually attracted to someone else, they assume the partner has similar feelings about others. These individuals become suspicious and vigilant, even when the partner is entirely innocent.

For example, a man who feels attracted to others may assume that because he has such feelings, his wife or girlfriend must have them too. Anyone who is keeping a delicate balance between loyalty and temptation may suspect that his or her partner is not above it either.

The only really helpful response to jealousy is to reaffirm the bonds of the partnership. If the bonds are indeed being broken—by infidelity, distance or dishonesty—then the jealousy will quickly turn into desperation, despair and rage. The solution to jealousy is trust, and trust is not an act of faith, but the state of the relationship. It takes both people, it takes time and it takes consistent effort, reminds Pittman.

If jealousy is answered by closeness, the jealous response usually lessens. 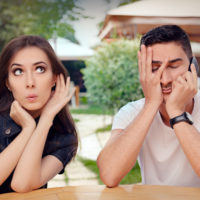 How Do I Stop Being Jealous and Possessive?

What Do I Do When My Boyfriend is Very Friendly With His Ex?

Do I Have to Tolerate Photos of My Boyfriend’s Ex-Wife?

Facing The Green-Eyed Monster Together