Note: this is the third of a three-part series.

On the simplest level, the way we approach our intimate relationships demonstrate whether we’ve learned if people are safe and trustworthy, or whether being close to others is dangerous because we are likely to end up getting hurt.  The fights, withdrawals and hurt feelings are really clues to both partners’ psychological histories, say Harville Hendrix and Helen LaKelly Hunt, in the book Receiving Love (Atria, 2004).

Hendrix and Hunt assert that almost all negative relationship behavior is the result of psychic injuries that have not healed.  Being quick to anger, defensiveness, being mistrusting or excessively self-absorbed are often symptoms of unhealed wounds, many of which come from childhood.

It seems as if the past should stay in the past.   But the truth is that our pasts travel with us, even if we are not aware of it.  In the same way that no one gets out of life alive, no one reaches adulthood whole and unblemished.

In childhood, when a parent or caretaker excessively shames, criticizes, judges, ignores, punishes or violates us, our self-esteem gets injured.  We deal with that injury by rejecting in ourselves the behaviors which our parents had rejected or disapproved of.  Over time, we wind up rejecting more and more things about ourselves—our desires, feelings, impulses and needs.

So if at age two, I was sharply punished for throwing temper tantrums and expressing my needs, now as an adult, I may not be in touch with my needs, and I may express anger in an extremely indirect, passive-aggressive way.  I have learned to reject those parts of my self which were not safe to express as a child.

Hendrix and Hunt call this “self-rejection” the engine which makes it difficult or impossible to form long-term, enhancing relationships with other people.  This self-rejection leads to disconnection (to yourself, to other people and to your spiritual core).  It also leads to well-developed defenses (the more our whole selves have been lost, the more heavily defended we must become); and self-absorption (the more split off we are from our whole selves, the less likely we are to care genuinely about other people.  There is, after all, less of us to do the caring.  We have a hard time seeing our partner’s needs and wishes as distinct from our own, and we judge them harshly because we judge ourselves harshly).

The self-rejection we have been addressing also leads to addictions; projection (since we have already rejected our “missing selves,” we will also reject, judge or criticize anyone who indulges in behavior that was forbidden to us) and abuse (someone who has learned that he is not acceptable, not lovable and not worthy can easily engage in behavior that is self-destructive.  The same wound that leads one to self-abuse might lead another person to abuse others.)

Self-rejection often masquerades as something else.  It can be disguised as dissatisfaction and negativity about life in general—or by depriving yourself and your partner of sex, enthusiasm and lightness.  It can look like perfectionism, shyness or a reluctance to extend one’s self by trying new things.   It can be expressed by rejecting compliments, refusing gifts or offers of help, or being dissatisfied once you get what you ask for, or by  criticizing, discounting, devaluing or picking fights with your partner.  If you desire intimacy and closeness but then say or do something that makes your partner withdraw—you won’t be feeling much love.

This self-rejection is the source of our difficulties in both giving and receiving love, say Hendrix and Hunt.  As a result, many people are willing to settle for nominal contact instead of the real thing we call true connection (which is defenseless relating), passion and love. 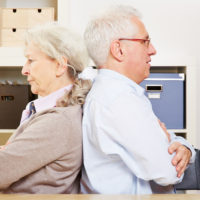 Building A Case Against Your Partner