NOTE: THIS IS THE FIRST OF A TWO-PART SERIES

Dear Neil: Please settle a disagreement between the two of us. My husband says that romance is about candlelit dinners and lovemaking. I say it is more about eating and vacationing together. Who’s more accurate?

Dear Wanting More: Neither of you have it exactly right. Hollywood has dramatically distorted our notions of romance and passion. Watching Humphrey Bogart gather teary-eyed Ingrid Bergman into his arms may make your heart pound, but real-life romance is fueled by a far more humdrum approach to staying connected.

It is kept alive each time you let your spouse know he or she is valued during the grind of everyday life. Romance actually grows when you know your spouse is having a bad day at work, and you take 60 seconds out of your workday to leave words of encouragement on his voice mail. It grows when your wife tells you “I had the worst nightmare last night” and you say “I’m in a big hurry, but tell me about it now so we can talk about it tonight,” instead of “I don’t have time.”

In these instances husband and wife are making a choice to turn toward each other rather than away. In marriage, people periodically make “bids” for their partner’s attention, affection, humor or support. Spouses or partners either turn toward one another after these bids—or they turn away. Turning toward your partner is the basis of emotional connection, romance, passion and a good sex life.

Couples who turn toward each other remain emotionally engaged and stay married. Those that don’t eventually lose their way. Partners who characteristically turn toward each other are putting money in their emotional bank account. They are building up emotional savings—by storing good will—that can serve as a cushion when times get rough, when they’re faced with a major life stress or conflict.

But the biggest payoff for turning toward your spouse in the little ways is because of the long-lasting romance it generates. Many people think that the secret to romance, passion and reconnecting with their partner is a candlelit dinner or a by-the-sea vacation. But the real secret is about turning toward each other in little ways every day. A romantic night out turns up the heat only when a couple has kept the pilot light burning by staying in touch in the little ways.

The first step in turning toward each other more is simply to be aware of how crucial these mundane moments are, not only to your marriage’s stability, but to it’s ongoing sense of romance. Romantic gestures such as special dinners, weekend getaways, flowers and cards are useful in keeping romance alive. But the heart of romance—the essence—is to just stay connected. You do so by favorably and generously responding to your partner’s bids for emotional connection.

I will offer a quiz on this subject in next week’s column.

Valentine Lessons in Being the Best You Can Be

Going All Out: Increasing Your Attachment 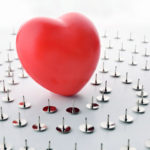