Dear Neil:  I seem to get defensive a lot—whenever someone at work criticizes me or suggests how I could have done better, whenever my husband makes a request of me that implies that I’m not doing a good enough job as a wife, whenever my daughter says something that hurts me.  Then I get angry, and I can get very angry—even rageful.  Could you explain why I am reacting the way I do, and what I can do to improve it?  I know most of the time people are trying to be helpful and constructive, but they get me all the same.  Why?

Dear Defensive:  People who are oversensitive to criticism may think that they are being shamed, disrespected or embarrassed by someone else, even when that it not the intention of the other person.

Shame is the sense that there is something wrong with you, as if there were a flaw in your basic character or personality.  Thoughts that often go along with the sense of shame include “I’m no good.”  “I’m not good enough.”  “I’m unlovable.”  “I don’t belong.”  “I should not exist.”

Bodily sensations that often accompany the sense of shame include feeling totally exposed, wanting to run, wanting to hide your face, looking down or away from others, blushing and paralysis—feeling frozen on the spot.  And—sometimes—a tremendous urge to clobber the person or people who have triggered your feelings of shame, argues Ron Potter-Efron in “Stop The Anger Now” (New Harbinger).

Shame is a powerful emotion.  It is not all bad, because when we do something reprehensible, hurtful, insensitive or dishonest, we need an inner conscience to tell us that we did wrong.  But shame can be a real problem when it hits too strongly, without warning, when it comes out too frequently, when it paralyzes us, or when it compromises or destroys our ability to coexist peacefully with others, especially people we care about.

The shame-rage connection occurs whenever you defend against your own feelings of shame by attacking others.  The goal of a shame-rage attack is to belittle, weaken, humiliate or even destroy the person who offended you.

Most of the time, people don’t realize that shame is involved.  The anger comes on so quickly that the person doesn’t connect it with shame.

If you would like to examine this issue, carefully answer the following questions:   How often do you think your anger is connected with shame?  Can you think of a time when you became really angry to defend against shame?  How did you respond?   What did you think, feel, say and do?  What were the results of your actions?  What have people said in the past that triggered a shame-rage attack ?

How do you begin to change this scenario?   Think of a disagreement where you got defensive.  With whom?  About what?   How did you get defensive—what did you think, feel, say and do?

Now for the grain of truth.  As you think back, what was the other person saying that was at least partially true?  What did you not want to accept about what the other person was trying to say?  What were you saying that was exaggerated or at least partly untrue?  Why would you guess that you were getting defensive?  What was the grain of truth in his/her viewpoint?

Discuss the situation with the person who offended you.  Tell him/her that your felt shamed about what s/he said or did.  But don’t stop there. Heal your shame once and for all.

I will address how in a future column. 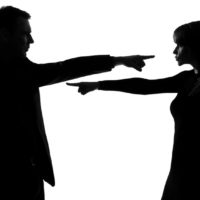 Do You Feel a Lot of Shame?

2 comments on “Being Less Defensive and Reactive”

with Neil Rosenthal, LMFTLicensed Marriage & Family Therapist
x
Top Are You A Mensch? I Put Up My Dukes When…