Dear Neil:  What is the best way for a man in a new relationship to manage old platonic female friends of the opposite sex?  I have just made a major blunder and destroyed my new lady’s trust by taking an old platonic female friend to a movie when my lady could not attend.  I was scared to ask her permission, or to even suggest that taking a long-time female friend was an option, because of the jealous abuse I have received from previous women who haven’t been comfortable with me having female friends at all.  It seems unfair to force me to dump my long-time friends, and it seems equally unfair to allow my new woman to have that much control over what I can and can’t do.

Dear Confused:  The central issue is:  How do people build trust with each other, and how do you avoid injuring trust in a relationship once it’s established?

It’s OK for you to have platonic female friends while you’re in a committed, intimate relationship.  But that requires you to reveal, not hide, your conversations and get-togethers with those friends, so no one starts to feel threatened or insecure.  If a woman does feel insecure or threatened, it’s up to you to neutralize that fear by introducing the two women to each other, holding your lady’s hand or otherwise being endearing toward her while the three of you are together, and generally acting trustworthy at all times—which means no secrets, hidden get-togethers or anything else that would arouse suspicion or threaten someone’s sense of security and trust.

Of course, some people are insecure and suspicious by nature, and would be threatened by another female no matter how platonic that relationship was.  But that’s not most people.  Most women need reassurance that you’re not looking to stray, that she has no reason to feel threatened by your social contacts, and she knows she can trust that what you tell her is the entire truth.

Explain this whole situation to your lady, and then ask her what she needs in order to regain trust in you.  Being in a trusting intimate relationship absolutely means you’re handing some control and authority over your behavior to someone else.  That’s how trust gets built.  If a woman knows you value her wishes and feelings above everyone else’s, hopefully she will not be threatened by your friends.

Dear Determined:  I don’t wish to convict people unless I have compelling evidence to do so, and the evidence against your boyfriend is spotty.  That said, I would recommend you be on the alert for any evidence that your boyfriend is being extremely affectionate or inappropriate with your daughter—or any other young girl.  Is your daughter uncomfortable with your boyfriend or the two boys?  If so, why?   Has anything occurred, now or in the past, where she was asked to do something by any of them that made her feel threatened or unsafe?

It would be vital for you to keep open lines of communication with your daughter so that if anyone makes her feel unsafe or threatened, she can talk to you about it. 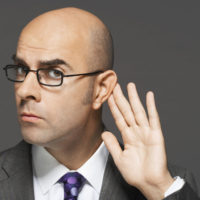 Finding Your Voice is Essential in a Relationship

Rebuilding Trust After a Betrayal

with Neil Rosenthal, LMFTLicensed Marriage & Family Therapist
x
Top Can My Boyfriend Overcome Commitment Phobia? What Do I Do When My Boyfriend is Very Friendly With His Ex?