There is Another Way

Terry Dodson tells a story of learning about handling and resolving conflict. Because of space limitations, I’ve had to edit his tale to its essence.

“The train clanked and rattled through the suburbs of Tokyo on a drowsy spring afternoon.

At one station, the doors opened and suddenly the afternoon quiet was shattered by a man bellowing violent, incomprehensible curses. The man staggered into our car. He wore laborer’s clothing and was big, drunk and dirty. Screaming, he swung at a woman holding a baby. The blow sent her spinning into the laps of an elderly couple. It was a miracle that the baby was unharmed.

Terrified, the couple, jumped up and scrambled toward the other end of the car. The laborer aimed a kick at the retreating back of the woman but missed as she scuttled to safety. The train lurched ahead, the passengers frozen with fear. I stood up.

Seeing me stand up, the drunk recognized a chance to focus his rage. “Ah-hah!”. A foreigner! You need a lesson in Japanese manners!” I planned to take this turkey apart.

A fraction of a second before he could move, someone shouted, “Hey!” We both stared down at a little old Japanese man. He must have been well into his seventies, this tiny gentleman, sitting there immaculate in his kimono.

“C’mere,” the old man said in an easy vernacular, beckoning to the drunk. “C’mere and talk with me.” He waved his hand lightly.

The big man followed, as if on a string. He planted his feet belligerently in front of the old gentleman and roared above the cackling wheels. “Why the hell should I talk to you?” The drunk now had his back to me. If his elbow moved so much as a millimeter, I’d drop him in his socks.

The old man continued to beam at the laborer. “What’cha been drinkin?”, he asked, his eyes sparkling with interest. “I’ve been drinkin sake, and it’s none of your business!”

“Oh, that’s wonderful”, the old man said, “absolutely wonderful!  You see, I love sake, too. Every night, me and my wife (she’s 76, you know) we warm up a little bottle of sake and take it out into the garden and we sit on an old wooden bench. We watch the sun go down, and we look to see how our persimmon tree is doing. My great grandfather planted that tree.”

The laborer’s face began to soften. His fists slowly unclenched. “Yeah,” he said. “I love persimmons, too…” his voice trailed off.

“Yes,” said the old man, smiling, “and I’m sure you have a wonderful wife.”

The train arrived at my stop. As the doors opened, I heard the old man cluck sympathetically. “My, my,” he said, “that is a difficult predicament indeed. Sit down here and tell me about it.” The laborer was sprawled on the seat with his head in the old man’s lap. The old man was softly stroking the filthy, matted hair.

As the train pulled away, I sat down on a bench in the station. What I had wanted to do with muscle, had been accomplished with kind words. It would be a long time before I could speak about the resolution of conflict.” 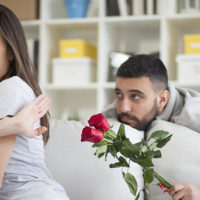 Be The Bigger Person