Dear Neil: I am sorry to report that my marriage was as dysfunctional as any. My husband used to bad mouth me in front of the children, and after we had been married seventeen years, I started cheating on him. My daughter figured it out. She didn’t say anything, but I knew that she knew.

Our daughter then ran off with a guy. After she got pregnant, she wanted to come home to Mama. She and her true love were married about five months before she had her son. She was home again in about a year. While she was going to college, she got pregnant again. No marriage, but she had a beautiful little girl six years
after her son.

There is no point in flagellating myself, but if I could understand my daughter’s behavior, I would feel better.

Dear Dysfunctional: Your daughter is likely following her parent’s role model for how to be married.

It is hard to overcome and to rise above our intimacy blueprints. All of us tend to repeat the familiar in our intimate relationships, and whatever we grow up with is what is familiar to us. If we see Dad belittling Mom a lot, or Mom cheating on or being dishonest with Dad, somewhere in our minds we record that that’s how men and women treat each other.

Then, when we marry or commit to someone, we will be likely to repeat some variation of what is familiar to us, thereby continuing the intimacy blueprint for yet another generation.

Of course, very few of us are aware of this process, so we think we can just tell our children to not do marriage the way we did it. But whenever your children go on autopilot and aren’t paying attention—which is most of the time—they won’t repeat in their marriages what you told them to do, they’ll repeat what they witnessed or experienced.

The good news is that this pattern also holds true for people who come out of good, loving, effective families as well. If you and your spouse have a good marriage, your children are far more likely to learn positive intimacy skills and good marriage role modeling. They are then likely to repeat the familiar when they marry, increasing their chances of having a loving and effective marriage themselves.

Dear Neil: Several months ago you printed a letter from a man in San Francisco who asked the question “when is it going to be my turn?” He described a situation where he did most everything in the relationship with his live-in girlfriend, and got very little nurturance or TLC back from her.

I think you missed the boat in your advice to him, because you left out at least one other possibility: some people never get their turn, because they choose selfish partners who take and take and take without giving back.

Dear Realistic: You are right. Some people are self-absorbed. They often lack effective intimacy skills, and they expect to receive a lot in exchange for giving a little. 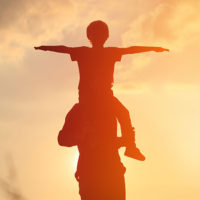 Understanding Your Father’s Influence on Your Life

Carrying a Torch for Somebody from the Past