Dear Neil:  I’ve been in a relationship with someone for three years.  My boyfriend says that I don’t deserve to be with someone who is so up and down with his feelings.  He says he loves me and is in love with me, but can’t stay because he doesn’t deserve me.  He still wants me to be in his life—and I would love to be his wife.  We’ve discussed making a clean break, but we never get around to it.  This is hard.

Dear Feeling Rejected:  Your boyfriend is saying “no” to you.  Its not that he doesn’t deserve you, its because he wants something or someone else, and isn’t openly acknowledging those motives.

Release him.  If he decides that he wants you after all, he’ll come back.  If he doesn’t, he will have succeeded in wiggling out of a relationship without ever having to tell the truth about his true feelings toward you.  If he does come back, it needs it needs to be under a different set of rules if you ever want to feel secure in the relationship.  You would have to ask him—and he would have to openly and honestly address—what’s in his way, and what he needs, in order to commit to a future with you.

Dear Neil:  My husband wants a break from me.  We have been married nine years and have two young girls.  I don’t want a separation.  How can I help him change his feelings concerning our marriage?

Dear Desperate:  You could ask him what he would need in order to reconsider his decision.  What needs/wants of his aren’t being met?  What would he like different?  What would have to happen in order for him to feel happy, fulfilled and content in the marriage again?  Encourage him to openly answer those questions.  If you can grant him his wishes, do so, and see is your husband’s feelings about you and the marriage change.

Dear Neil:  My husband of 23 years has been friends with a female for quite a while.  At one time I told him that I had uncomfortable feelings about the relationship, but he said I was being silly.  Last week she called, and as he hung up he said, “I will talk with you later, babe.”  My husband has never been one of those people that call other people hon or babe or anything like that.  When I asked “When did you start calling her babe?” he blew up and said I was being weird and stupid.  During the first ten years of our marriage he had quite a few affairs, and his reaction to my question was exactly what it had been in the past when caught.  The very next night a call came through from this woman.  I listened to the voice message and she said, “Hi honey.  I’m sorry I missed your call.”  He says there is nothing going on between them.  What should I believe?  My husband says she talks to everyone that way, but I have met her and she has never called my husband that in my presence.

Dear Lost:  Your husband’s behavior sounds suspect to me.  Although it’s possible that he and the other woman are just being playful and friendly with each other, I don’t think that’s the most likely explanation, especially when we look at his history of repeated affairs.  At any rate, it isn’t silly, weird or stupid that you would have such concerns. He is trying to say that your concerns are out of line rather—rather than his behavior.  I would say you may have a serious problem on your hands.

How to Let Go of a Relationship 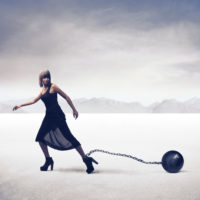 Reducing Your Attachment to Your Ex

with Neil Rosenthal, LMFTLicensed Marriage & Family Therapist
x
Top Why Can’t I Commit To My Boyfriend? Wife’s Low Libido May Have Many Causes