Dear Neil: I’ve been married for 17 years to a wonderful man. Last summer I discovered that my husband had had a secret E-mail correspondence for the last two years with his old girlfriend. She had left my husband 23 years ago, after they had a one year relationship.

I believe that with work and commitment, a relationship can be saved. However, I feel as if I am not really here: I’m just going through the motions. I’ve now lost all my self-confidence, and even though he doesn’t write to his girlfriend anymore now that he knows that it hurts me, our relationship is not the same.

I’m convinced that he now has a crush on a friend of ours, a single mother. I’m very suspicious. I hate feeling this way, but the result is that I’m not really there when we are together. I pray that the jealousy will go away.

Dear Hopeful: “Not being here” is about protecting yourself from being hurt. You are staying emotionally removed in order to not risk getting hurt again.

Because it’s self-protection, it is within your control, and you can change that behavior if you wish to. So ask yourself what would your husband need to do or say in order for you to emotionally come back and be fully engaged with him again? Then tell him exactly what it is.

Your “jealousy” is not likely to go away on its own, since it is born out of your own insecurity. For the record, it’s not exactly jealousy. Your being hyper-vigilant, which is staying on guard so that no other possible surprises catch you so unprepared and off guard.

If you don’t break this pattern, you’ll wind up in the alarming position of remaining married, but finding yourself emotionally detached and uninvolved with your husband. Let him know right now what you need from him in order for you to come back.

Dear Neil: Do most people that have a “first love” carry on deep feelings for their former flame? Are they prone to reigniting those feelings should they cross paths, despite being in a good marriage with another person? Or do most people have exclusive feelings only for their spouse?

Dear Portland: No, I don’t think most people are prone to reigniting with an old flame if they are currently in a happy relationship.

The problem occurs either when you’re not happily married, or when you haven’t fully let go of the “old flame”, and are therefore still carrying some hope that things will rekindle for the two of you in the future.

This scenario scatters the emotional energy you are able to bring to your marriage. It keeps you—perhaps even without you being aware of it—partially emotionally removed or detached from your spouse.

Often we have the notion that someone we know from way back understands us better than anyone else. This notion is often not true, incidentally.

Love Will Not Work With a “Guarded Heart” 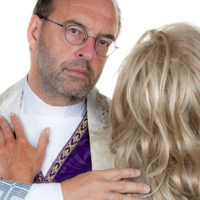