Dear Neil:  My wife and I have been married for almost 30 years.  (We are in our mid-fifties).  For the last two or three years, I have noticed that she has gradually lost interest in sexual intimacy.  I’m attracted to her and would love to see her back to her good old days, where as a couple we shared an active life together.

I am writing to you in an attempt to understand if her behavioral/physical change is normal for a woman of her age.  And more important, can I do anything to remedy the situation?

Dear Concerned Husband:  So many things can influence a woman’s libido—the level of affection and closeness in your relationship, the quality of your emotional interaction with each other, romance, endearments, nurturance, how much sleep she’s getting, whether she is hurt or angry with you, whether she feels valued by you, whether either of you have emotionally withdrawn, whether the two of you have grown distant from each other, how she’s feeling about herself and her body, whether she is worried, anxious or depressed, whether she still views you as sexually appealing, whether something is disturbing her about your relationship—all of these can dramatically influence a woman’s level of sexual desire.

That being said, it sounds like the symptoms you have described may be the direct result of a decline of testosterone.  Most people think of testosterone as what men produce, not women.  But in truth, women produce testosterone also, although in far smaller doses than men.

Testosterone effects libido.  Called the “hormone of desire,” it stimulates sexual interest—and sensitivity to sexual stimulation.  Although women need estrogen for lubrication and proper sexual functioning during sex, they need testosterone to feel desire and sexual arousal in the first place.

By the age of 40, most women produce at least 50% less testosterone than they did when they were 20.  Add perimenopause, menopause, any surgery which removes the ovaries, or estrogen replacement therapy—and a woman’s level of testosterone will be reduced even further, sometimes dramatically so.

We’re not talking here about major doses of testosterone.  That would have undesirable side effects for most women.  We’re talking about replacing the testosterone levels the woman used to produce when she was younger—to bring her back to the level of libido she had then.  In addition, testosterone therapy for women has been shown in studies to increase energy, psychological well-being and bone mass (which helps in the prevention of developing osteoporosis).

Ask your wife to talk with her doctor about taking testosterone.  It is most effective when taken as a pill, cream or lozenge.  If her libido doesn’t respond to this therapy, she may need a change of dosage—or some of the symptoms I mentioned earlier may need to be addressed and resolved.

It is important to note that this therapy is not for everyone, and replacing hormones does not always come without some side effects.  There are herbs and natural products as alternatives which may be effective also.  Her doctor can help her sort out the best choices for her. 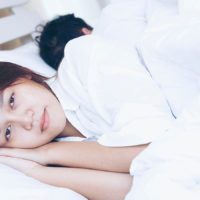 When the Sexual Problem Is Him

Married, But No Longer in an Intimate Relationship

with Neil Rosenthal, LMFTLicensed Marriage & Family Therapist
x
Top Why Do All Our Trips Get Ruined? Self-Sabotage Undermines Your Belief in Yourself